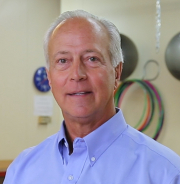 From October 2nd-8th I was given the opportunity and privilege of working with the United States team at the Presidents Cup. The event was held at Liberty National Golf Club in Jersey City, New Jersey. Although this was my seventh Presidents Cup, my adrenaline always gets flowing when I am given the opportunity to work with the golfers and be part of a team event representing our country. The United States team was captained by Steve Stricker who is respected by all of his peers for not only being a great golfer but a phenomenal individual. Assistant captains were Jim Furyk, Tiger Woods, Davis Love, and Fred Couples. All the assistants have had highly accomplished careers and were no doubt idolized at one time by the younger members of our team. Adding inspiration and pride to the team room was that earlier in the week, during the practice rounds, Davis Love was inducted into the Golf Hall of Fame. The golf knowledge and leadership skills he brings to the US team is reflected by our team victory at the Ryder Cup in Hazeltine in 2016 in which Davis was our captain.

All of the golfers have played fantastic the past year, a few of them with multiple victories. The significance of Phil Mickelson on the team cannot be understated. The confidence he adds to the team with his capabilities as a player is extremely noticeable. His leadership in the team room and on the course was a definite asset to the younger players. You could see he had a big influence on the mood of the team room, acknowledging the importance of the event yet keeping it fun.

I provided daily chiropractic care and manual therapy to Charley Hoffman, Jordan Spieth, Justin Thomas, Dustin Johnson, Matt Kuchar and Patrick Reed. Periodically I attended to Rickie Fowler and Daniel Berger. All were being challenged by the the wear and tear of the season and the demands of weekly FedEx Cup events. Many had already played 6-7 events over the past 8 weeks.

The US Presidents Cup Team performed very well as evidenced by the score at the end of the Saturday afternoon fourball matches with the US leading the Internationals 14 1/2 to 3 1/2. With a commanding lead the US Team went on to win the Presidents Cup on Sunday 19 to 11.

A noticeable and satisfying observation was to see the gradual changing of the guard on the US team. The young golfers on our team having the on course and locker room guidance of Steve Stricker and his staff proved a valuable asset throughout the week. Also, you could see the likes of Jordan Spieth and Rickie Fowler taking on leadership responsibilities throughout the week. Golf Hall of Famers and future Hall of Famers made for an all-star cast of great golfers. Passing the Statue of Liberty each day ferrying over the Hudson River to the golf course from our hotel near Ground Zero and representing the United States. Each day was filled with such positive emotions. It will be forever memorable!